The blog of the #1 nominee for Associate Justice to be picked by the #1 smartest President to ever withdraw, in all of history!!

So, I'm turning my blog back to its natural state... guess which color... Pink!! And I might not post as often now. But I will definately read comments and stay on email and everything so stay in touch.

Also I've been thinking about, what if they say "Hey, Harriet would've actually been great!! Lets get her again." How would I answer. Well you know what, this may surprise you, but my answer would actually be no! I've always had a philosophy of, "Judge not or you'll be judged yourself." And here I was thinking about being a judge full-time. Not a good fit.

In closing, I hope I can be an inspiration to other nominees in the future. God bless America (and the Blogosphere!!).

You know how when people die, they have a funeral and all they're friends come, and its like, "hey if only they'd known how everyone cared about them when they were still alive"? Well this is like that!! I really want to thank everyone for all of the support and Kind Words. I have so much to be thankful for. And, last night I was bowling and got three strikes in a row...maybe I should get withdrawn more often! LOL But seriously it warms my heart. I'll be okay.

Also some people have been asking about my reaction to the Scooter stuff... well I don't know where you're from but in AMERICA, there's a little thing called "abstinent until proven guilty."

UPDATE: OMG I meant "innocent"... [RED FACE] maybe I do need to take some time off

I have to help figure out who the next nominee is... I know, sucks... so here's a question. Can you nominate John Roberts for Associate Justice, so he'd get two votes on the SCOTUS? He was a really good nominee last time.

This is obv a really hard day for me, I was super excited about being a Justice. I was looking at my very first blog post and it made me cry. But this day isn't about me. Its about all of us. And I have to say... Thank You.

Of course I have to start with a thank you to Hugh. Hugh Hewitt. Hugh your the best!! Here's what Hugh wrote today,

Ms. Miers deserves great thanks for her significant service to the country.

Same to you!! Your simply the greatest.

Thank you to everyone who writes comments on this blog, Mike Sparkle Judy Gyrobo Bob Liz Ah Patrick EVERYONE, you know who you are. You are my BFF, for real.

Thank you to Nicolle...its the Silver Lining that I get to stay in the WH and work with you again. Your the BEST!!

THANK YOU MR. PRESIDENT. I know this wasn't you're decision any more than it was mine...but guess what, we're going to STICK TOGETHER just like always!! 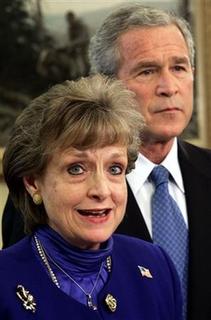 Its a pleasure to serve you sir, now and always.

I'll never forget being the Nominee, it was a learning experience at the very least.

PS to everyone who has written in saying I should do a Write-In Campaign, thanx, I don't want to rule anything out right now but its probably a No-Go. (If your a senator please email me, I need advice about this.)

Thanx reader GS for this quote.

And it seems to me you lived your nomination
Like a candle in the wind:
Never fading with the sunset
When the rain set in.

Goodbye Texas Rose,
From a country lost without your soul,
Who'll miss the wings of your compassion
More than you'll ever know.
Thank you so much to everyone whose writing.

Everyone in DC is tense with anticipation...well folks the WAIT IS OVER!! Remember, you heard it here first... I TURNED IN MY REVISED QUESTIONNAIRE!!!

the Senate Judiciary Committee has yet to recieve its updated questionnaire from nominee Harriet Miers We're told it'll get to them around 11 p.m. ET. Said NY Sen. Chuck Schumer in a statement at 8:45 pm: "This is another in a series of disappointments. The Miers nomination is suffering from a serious bout of delay, distraction, and disorganization and needs a dramatic turnaround."

I TURNED IN THE WRONG THING!! I'm not sure what was in those envelopes, maybe my taxes or something (yes, double extension and I'm still late, I've been busy OK!!)...but I was checking the blogs and I saw this and my heart went through the floor, the questionnaire's sitting on my desk. How could I be so dumb. Did Warren Burger ever do this?!! GRHRGGGG

Its a petition!! Please sign it, I already did. Here's what it says.

Dear Whom It May Concern, in this case WithdrawMiers.org,

Hi! Its "The Undersigned." Here's the basic message, PLEASE TAKE DOWN YOU'RE WEB SITE. WithdrawMiers.org.

Here are SOME of the reasons why:

> It is NOT NICE, which means you shouldn't say anything at all.
> Its a Waste of Space on the Internet--crowded enough already, esp w/ everyone having a Livejournal!
> Harriet Miers is the only nominee we've got, so "love the one your with." The Supreme Court can't exist if there aren't Justices on it. This is really two reasons.
> Hi, this is a personal message from Harriet, not the whole Undersigned. It would mean a lot to me personally if you took it down, like as a personal favor. I am not the type to promise to rule different for different people, but if you do the right thing please know I won't forget it.
> Okay its all of us again. Honestly we can't believe you even put it up!!! But its past history now, the important thing is the future, please withdraw it.

So those are the reasons... Thanx!!

So there you go!! I hope "you" will join "we the undersigned" and tell you're friends, because remember... there's no way a petition can be OVERsigned!!!

PS As you can see, there's a logo on the right, but if you make a better one please send it to me and I'll use it for sure. Also FYI you can go to www.withdrawwithdrawmiers.org, it comes right here.

I think this is just great!!
Its from HarrietFanSRO (no website, sorry). THANK YOU!! XOX H

UPDATE 10/27--I took down the video its not appropriate anymore.

Is it real. How do you find out.

Andy said not to blog but this is important, because I really believe that a Grass Roots "Call You're Senators" movement is the best hope. So real quick here's the rest of the entries. THANKS to everyone who sent them in!!!

This first one is from Shangri-Law Blog, and its dedicated to a good cause... Uncle Sam! 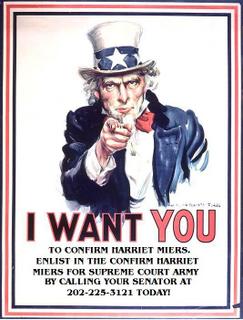 This logo is from from reader Ross McDevitt, see if you can get the reference!! Hint, its a movie.

Here is a logo from Jake Reif. I think my picture looks weird, like an Optical Illusion. Lovely writing tho. Thanks JR!

This one seems good until you look closely...it gets my blog wrong! And my name. So you cant vote for it, its really more an example of "what NOT to do." But its too late, the contest is over.

Hi from Questionnaire-istan...I'm trying to make up my mind about something. Does video count for the contest. The problem is that when I made the rules at the beginning, I didn't anticipate this situation. The original rules were just:

So most people just sent in pictures, but one person sent in a video, which I love, but is it unfair to everyone else because they didn't know a video is okay? I think if I'd thought about it at the time I would have said "no video," b/c my intent originally was just pictures. But now that things have changed I want to add video. I don't want to be unfair. WHAT DO I DO!!!

This is driving me nuts, its totally distracting me from preparing to be a Supreme Court Justice!!

Hi everyone! OK I'm not supposed to be blogging, I have to work on my Murder Boards and my Questionnaire (and might I add, its going to be the best questionnaire ever , I should apologize to future nominees for setting such a high precedent! J/K LOL... if only...) . Anyway I'm taking a short break just have to remind you, today is the deadline for the Call You're Senators logo contest. You probably thought I forgot... no way Jose, I'm a nominee of my word!! Also I should explain about "Don't Tell Leonard," Leonard Leo is in charge of keeping me On Task. He's basically a lawyer.

Here are some of the most recent submissions. If you sent one and you don't see you're's (??) here, it means it didn't "make the cut." Either that or I haven't opened you're email yet. Basically if you haven't gotten a reply back from me I haven't seen you're email yet, there's alot. I'd just like to say up front, way to go to EVERYONE who sent one in, A+ for effort and A++ for creativity!!

Here's a few of the current batch. I don't know how to make it so that the writing goes right next to the logo, so my comments might be hard to understand, please bear with me.

As you can see, some of these are done in the "classic style." Very nice!!

In one I have a really big head, well I hope that's not a joke about being the nominee "going to my head" LOL

As you can see one of them is really creative, just like Anne Geddes. I don't want to bias you're votes but I think that one would not be appropriate in terms of me being taken serious as a Nominee.

As far as the one that says "Ignite... desire," its beautiful!! And it makes you want to learn more.

All in all, nice work!! There's more where these came from, I'll post as soon as I can. Just a reminder, if your still planning to submit (and I hope certain people are!!), the final deadline is tonight (Friday) at midnight, . Now what if your on the West Coast. Good question. It doesn't make any diffarence, for you the contest started three hours earlier!!! Nice try tho...

UPDATE: One of these says 1-900-HARRIET, that's NOT the real number, the number on it has to be fixed or its disqualified. Good catch reader HH.